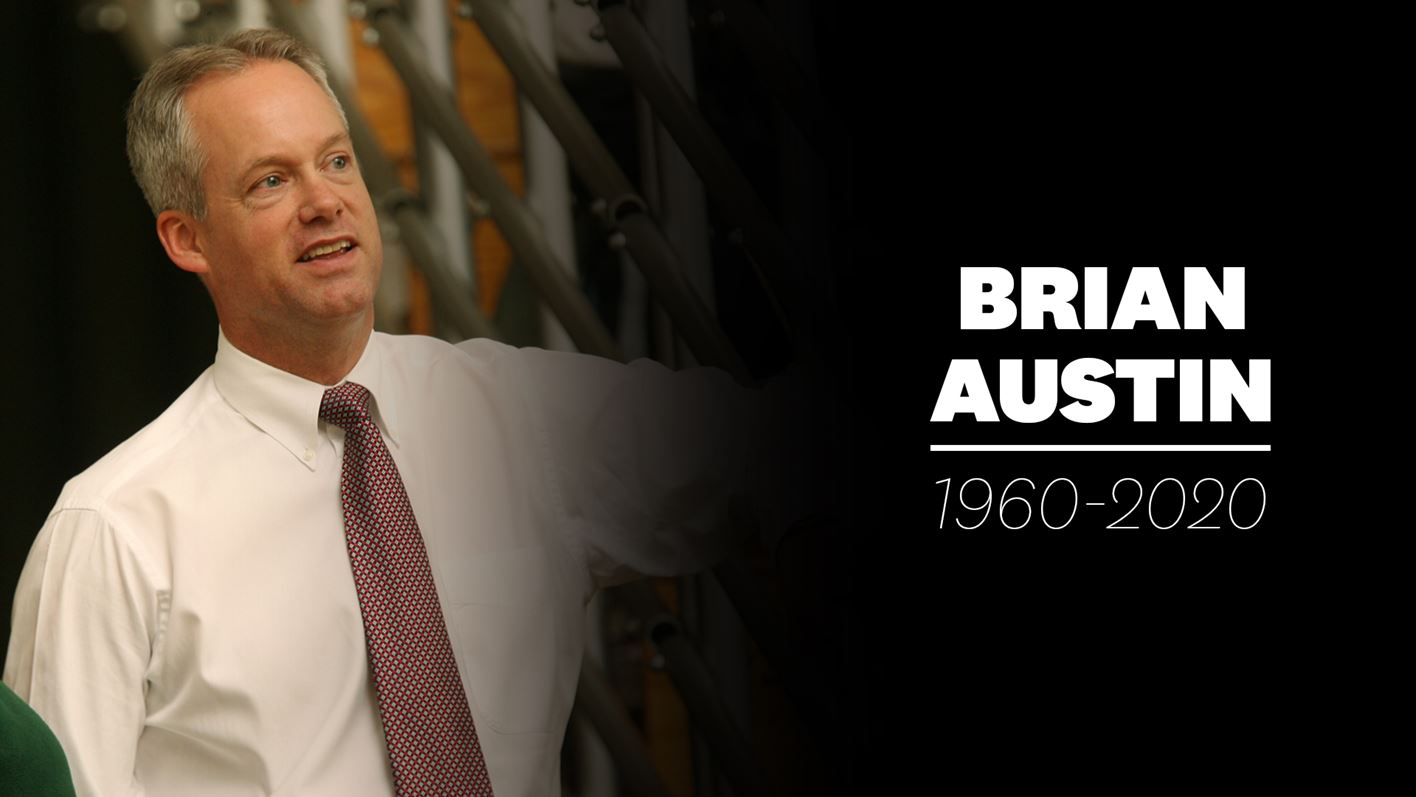 Portions of this article and photo are courtesy of Dartmouth College Athletics Communications. Please click here to read their article in full.

HANOVER, N.H. — Brian Austin, the Dartmouth Executive Associate Director of Athletics for Varsity Sports and a member of the Big Green athletics staff for nearly two decades, peacefully passed away on Monday evening at the age of 59 following a lengthy battle with cancer.

Brian served on the IRA Board of Stewards from 2013 through the 2018 regatta season. He also served as President of the Stewards during his final two years on the Board. Throughout Brian's tenure on the Board and as Stewards President, the Association saw several regatta enhancements including; enhanced on-site regatta coverage and big screen viewing of the event, upgraded web streaming including the implementation of a drone and new awards and honors for our student athletes including the recognition of an Overall Men's and Women's Lightweight Champion at the regatta.

"Brian was one of the most talented athletic administrators I have ever had the pleasure to work with," said Harry Sheehy, the Dartmouth Director of Athletics and Recreation. "He possessed the rare ability to build trust through truth. He was a tireless advocate for his coaches and student-athletes and was a rock in the department. He was highly respected and liked across the entire Dartmouth campus. On a personal level, I lose a great colleague and an even better friend. Our prayers go out to Brian's wife Bev and to his daughters Sarah and Kristina."

Austin, a native of Keene, New Hampshire, was originally appointed the Senior Associate Director of Athletics at Dartmouth by Josie Harper in 2002, before earning a promotion to his current role in 2008. He was responsible for the daily operations of the Big Green's 35 varsity sports with direct oversight of various varsity teams throughout his tenure, most recently baseball, men's basketball, equestrian, field hockey, men's and women's ice hockey, men's lacrosse, men's and women's rowing, women's rugby, sailing and women's volleyball.

"When I was appointed the athletics director, I had one person in mind to join the team," Harper said. "Brian was a kind and gentle man but had the strength to step up and tackle difficult situations. His integrity and strength of character, along with his fairness as well as his ability to relate to our coaches, was paramount. No matter what the issues were, you could always count on Brian to listen and come to the discussion with no agenda except to be fair."

A 1984 graduate of Amherst College where he played baseball, Austin began his career in athletics as a baseball coach, working as an assistant at his alma mater and the University of Massachusetts from 1984 through 1986. After serving as an administrative intern at Syracuse for a year and receiving his master's degree from UMass in 1987, he was named assistant athletics director at Cornell University and spent nine years there, receiving a promotion to associate athletics director in 1994.

From 1996 to 2002, Austin served as the Director of Athletics at Transylvania University in Lexington, Kentucky. During his six years at Transylvania, he led the transition of the college's athletics program to NCAA Division III, secured membership in the Heartland Collegiate Athletic Conference and oversaw the construction of a new athletic center and baseball facility.

A memorial celebration will be held at the Lebanon United Methodist Church (18 School Street) on Saturday, Feb. 8 at 3 p.m. Memorial contributions may be made to the Pancreatic Cancer Action Network.